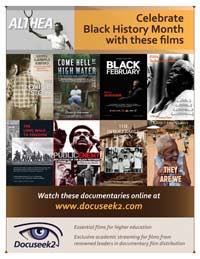 For Black History Month, we have assembled a thematic collection of 13 titles focusing on African American history. This collection is available for licensing as a specially-priced set of films for schools that are new to streaming from Docuseek2. For schools that have already licensed The Docuseek2 Collection, we have created a playlist of the films.

Several of the playlist / collection titles look back to (or hark from) the critical decade of the 1960s, including:

And more! As always, free 10  previews are available to any registered user.

More on the Women’s History Month and Earth Day to come.