Following up from the last post, we have released our Women’s History Month Sampler for March, and our Earth Day Sampler for April.

The Women’s History Month Sampler includes the six-film series A Woman’s Place, plus 12 other films celebrating women’s history and the struggle for equality and equity. For schools that have licensed the entire Docuseek2 collection, the films are also available as a playlist. 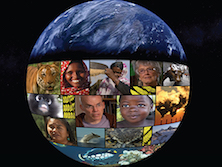 The Earth Day Sampler was a tough call, because we have so many great films about sustainability and the environment. So the selection of films was a bit arbitrary:

THE AGE OF STUPID – An old man (Pete Postlethwaite) living in a devastated world, watches ‘archive’ footage from today and asks: Why didn’t we stop climate change when we had the chance? (Bullfrog Films)

CICLOVIDA LIFECYCLE – A group of landless farmers and musicians from northeast Brazil, traverse the entire South American continent by bike in search of natural seeds and expose the devastating effects of industrial agriculture destined for biofuel. (Collective Eye Films)

AN ECOLOGY OF HOPE – A profile of Pierre Dansereau, ecologist, visionary and inveterate optimist, who believes that while the environment may be threatened by human beings, it will also be saved by them. (National Film Board of Canada)

IF A TREE FALLS – The Academy Award-nominated story of the radicalization of an environmental activist, from his involvement in and later disillusionment with Earth Liberation Front sabotage, to his eventual arrest by the FBI and incarceration as a domestic terrorist. (Bullfrog Films)

MR. CO2 – Traveling from Copenhagen to China, and from Australia to the US, this documentary looks at the state of carbon emissions and efforts to rein them in. (Icarus Films)

TIERRALISMO – An in-depth portrait of a Cuban agricultural collective that has drawn international acclaim for its sustainable practices. (Icarus Films)

THE WISDOM TO SURVIVE – Examines the challenges that climate change poses and discusses meaningful action that can be taken by individuals and communities. (Bullfrog Films)

The films are also available as a playlist if your institution has subscribed to the Docuseek2 collection.

But as I said, the selection is arbitrary — do a keyword search on “enivornment” or “sustainability” to get a much much larger list of great titles.